Edu Swap This for That! #AprilBlogADay 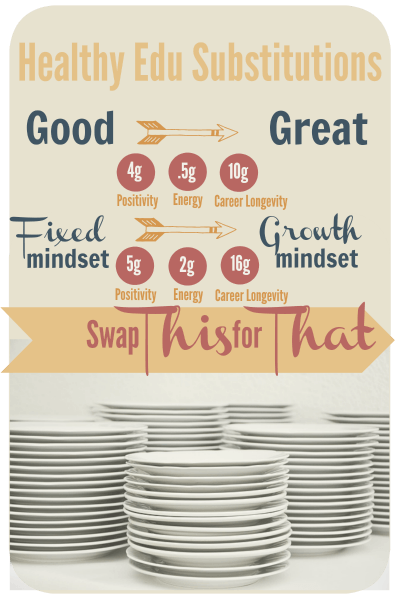 I enjoyed this great quote by @blunteducator Tuesday which helped me tie up some of my recently loose ends.

I often chuckle at the wit this twitter account delivers, but this thought hit me deep and I spent the day letting it simmer on my back burner. When I

reached a quiet place in my day that evening I leafed through my a book of quotes I have kept since high school, sure that I would identify the feeling which wanted to become a thought. But I could not find a phrase already crafted to perfectly describe the feeling. Edgar A. Guest’s Good Enough came close, but it was more than that still.

I was really looking for a way to describe my recent efforts with teachers.

I have been sharing the full extent of my understanding on some creative ideas with a variety of schools over the last month. One person asked if I worried they wouldn’t need me after I taught them all my tricks. We had a good time with the conversation, but it brought me back to the idea of a growth mindset versus a fixed mindset. I can’t see being upset by the question because K12 has capitalized on the fixed mindset for so long. The idea of ‘Google replacing a teacher’ is the battle cry of those who would like to remain in that old fixed mindset. The opposite of that is to acknowledge that we cannot go back to the teacher as the sole font of knowledge, so let’s grow into a new, evolving mindset. I am not mad about it, but some days I want to attack it and force the change quicker. So when that teacher asked that question out loud she was really asking if this was the way she could practice growing, if this was a way I was comfortable making her my equal in this knowledge, if I was still willing to help her after I already helped her.

I want to say yes to all those questions! 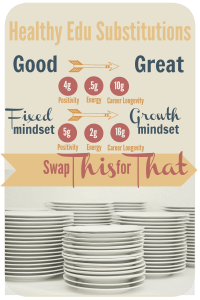 Here is my best effort at articulation of the statements of my thoughts on giving up being good to pursue being great: