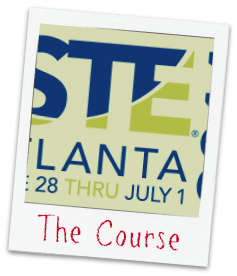 Whew, there’s the politics of this course and then there is the reality. Let’s dwell on the latter.

March of 2014 I proposed a three segment online “course” for the 200+ International Society for Technology in Education (ISTE) attendees of district was sending via Title IIA funds to Atlanta. While participants could always receive credit for attending a conference related to their certification, however this would serve two additional purposes; this course could offer two more Professional Learning Units (PLUs) and document Title IIA funds are spent on meaningful, lasting professional development. For whatever reason, the messaging between my central office and building leaders to participants was underwhelming. I am sure the timing of ramping up for a summer conference was not an enticing bet to go all in on during the Spring of 2014. Also, site-based substitutions and summerish-thinking educators did not always follow procedures when switching enrollments. I would say the participation was not stellar, but I can say I learned quite a bit from putting together the course. I can walk you through how I put it together…

Aware that we were at the end of life on our current learning management system (LMS), I wanted to create content which might be repurposed later. I used SoftChalk for much of our content as our district would retain access to that throughout the LMS transition. Because we were at the end of life for the LMS we were rolling back support from the Dell user interface and (re)introducing direct access to the underlying LMS Brainhoney. Faculty were not widely accustomed to accessing the LMS directly, so we needed to issue a Quick Start Guide for two courses my work group was facilitating that spring and into the summer.

(accessible from anywhere in the course) ISTE Help, Technical

(accessible from anywhere in the course) ISTE Help, PLU

Before Activity | Plan Your Schedule

During Activity | During the Conference

After Activity sent as an email gauging their interest the first week in September, since I had so many false leads in the before and during conference activities:

I also utilized Google Docs as a way to preserve content for repurposing in the future.

Some of the content in the SoftChalk packages were made with video editing software: Camtasia and Captivate. The Camtasia segment – although not one of my best – was not hard. I would have loved to touched it up before publishing, but you know sometimes the timeline dictates the best you have not the perfect version. The Captivate segment though was a tough. Very tough. I am a Captivate novice and although it is just one more program piggy-backing on Microsoft’s Powerpoint it is one which has a particular “touch” which you only acquire by making a million extra slides the few times you try Captivate. Because I was nervous about the sensitivity of the program and my lack of finesse in the program – I took the time to write-up scripts – yes, on notebook paper, yes per slide, sorry to wake you but here is one:

Overall, this entire experience was a win. My district sent over 200 educators to ISTE – that rocks! Plus, I gained some real world experience both writing and facilitating an adult learning experience online. I have content to reference and demonstrate my improvement the next time I built/facilitate something comparable. I submitted documentation of over 2,100 hours of learning at ISTE which resulted in 142 PLUs for teachers in attendance (one of those is more exciting to type than the other).