Who to Involve in Edcamp 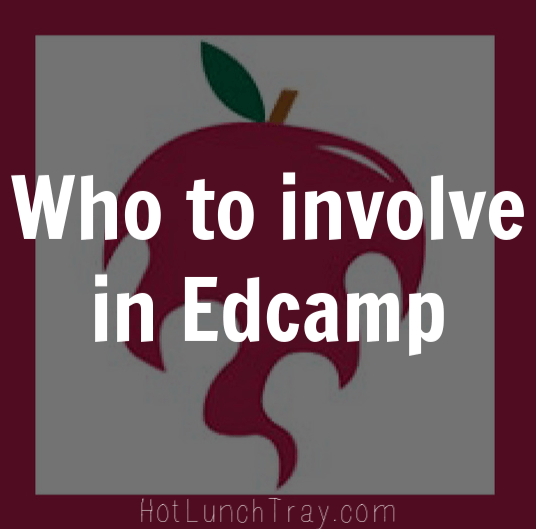 This post is first in the series The Beginner’s Guide to Starting a Local Edcamp. Check out all posts in the series: Who to Involve in Edcamp, Edcamp SWAG & Door Prizes Round-up, and Jobs at an Edcamp.

Who to Involve in Edcamp

I fell in love with the idea of Edcamps the moment I first participated in one.

I made an effort to find one at the right time of year and did not mind traveling; I went to Savannah, GA @EdcampSav. I then identified my expectations and quickly followed-up with one closer to home in Atlanta, @EdCamp ATL.

Once I hosted one, I have forever identified a source of both high anxiety and high satisfaction. But I am addicted to the high of providing fellow professional educators both time and space to reflect on their practice in a safe, collaborative setting. Psst, I do not count the in-district option as we did not control who actually was able to come to that one.

And I know that Edcamp isn’t for everybody in the same way that no single Professional Learning can be for everyone. But I sure do believe most people should try it to evaluate that for themselves.

Who to Involve in Edcamp?

So, who is a likely participant/volunteer/evangelist for EdCamp? Plenty of people you work with right now. Those with influence, but not a title. Those with drive, but without direction. Those who believe in the power of a single teacher. The motivation for participating in an Edcamp often comes from the power of a personal invitation.

The belief that one can work outside a school system and come up with the resources to put on a successful Edcamp may be harder to find. The team you pull together to put on an Edcamp has to thrive on their belief that an Edcamp can bring opportunity and change to participants. They have to be people easy to work with and flexible in remembering this is a volunteer job. They need to always treat everyone in a kind manner, without return volunteers you never grow your event!

Who is a likely participant/volunteer/evangelist for #EdCamp? #edchat 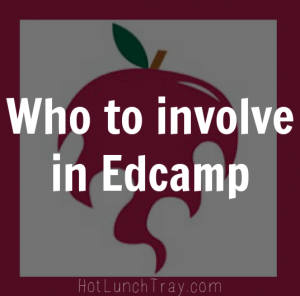 This isn’t time for a cold read. Start with those you know! Who have you successfully worked with in the past?

Involve as many different types of educators as you can: different levels (APs, Coaches, SPED teachers) geographic, philosophic, and demographics should that your Edcamp is inclusive and welcomes all educators.

Scour existing Twitter Lists from neighboring Edcamps to find those who are local and similar-minded!

Voluntell Folks How to Help

If you kick off the idea you need to be willing to tell volunteers how to help.

Do not reserve help only for the day of the event. Plan out some roles which can converge the week before your event. Ask a volunteer to research and implement an advertising/PR strategy, ask someone to gather donations, ask someone to provide meal(s). You may want to have them report out to the groups every week or so, but for the most part if a teacher wants to be involved they are likely self-motivated.

However, as soon as anyone takes ownership of something, tell them to let you know how it turns out. Only check-in to see what they need; trust them to the finish line. The nice thing about an Edcamp is that everything is a nice extra alongside the learning. So even if something does not get done it is not such a big deal. You are better off trying to develop ownership and build capacity within your team than trying to do it all yourself!