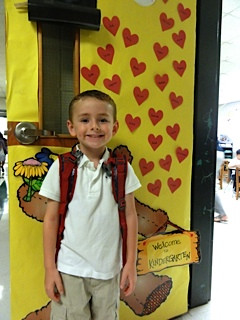 The good news for this mom is that I have spent 15 years in education by the time my oldest is entering Kindergarten, the bad news is that doesn’t matter.
The panic allegedly began 2PM Thursday, when my son’s long term substitute teacher called to welcome me to Open House that evening. Bless this poor lady; she gave me advance warning to start thinking about her credentials and why she doesn’t already have a permanent job, a real job. I fired off an email to my husband which read like a scouting report – what I would be looking for, what I was concerned about, etc. His reply was .. succinct:

I’ll let you freak out. I’m fine with whoever. I’m sure it will be fine.

Upon some sound advice from a former K teacher I decided to suspend judgment until I met the parapro teacher assigned to this classroom, as she would be the continuous element in the classroom. By 4:45PM I was full-on-panic, I was stalling going into the classroom until my husband arrived at the school. With two kids pulling on my arms I cornered the principal to ask if he had interviewed this long term sub, you know or had she tunneled in unchecked I guess. He assured me he had interviewed her, hugged me, and no doubt filed one away on me.

By the time our family found the room I was fully engulfed. The first person I saw was someone I knew – we had worked together through her Media Center. Whew, I told her I had no idea she was the teacher and I was so relieved.  She hugged me back and said she was the parapro and introduced me to the teacher through October, who had the same first name. If you are keeping score, let’s just say this is a blow out.

And what you may not know, what my husband pointed out once I was again outwardly calm, was that my son attended PreK in this same school.  Both PreK and K are Spanish immersion programs, he did fine last year and it was reasonable to assume he would do fine this year.  My husband had paid attention when I pointed out before PreK that Seth was a fine student, reading and pre-writing already, and this program would keep him engaged and not let him get in “boy” trouble.

So what was my issue really?  It wasn’t teacher credentials, this long term sub had superior certification to the PreK teacher.  In my family we were split on the fact that she wasn’t a native Spanish speaker; that issue didn’t matter as much since they rotate through a team of teachers to all get a good amount of Spanish.

I said I was concerned about the continuity of the classroom because I know how tenuous school can be for some children, let alone with upheaval during an academic year.  Of course, the only answer was to repeal maternity leave in early elementary grades.  Major legislation aside, what was the fragility I saw in public education that I was worried about a kid who already knew how to “do school?”  I felt he was already somewhat teacher-proof, yet the only real issue I had was a change-up in his teacher  in a couple of months.

I think the fear I felt in that situation was similar to the charge I thrived on when I was handed a class full of students; the difference is the control I (did not) have in this situation versus every other class I lead.  I think teachers are sometime martyrs; no one works as hard, no one puts in as much time, or cares as much as I do.

Someone else was in control when it really counted.

Wow, 15 years and I am just learning that lesson.

Talking to an educator at that school today I admitted to being a mess over the new situation – the long term sub that I had snubbed was good enough to get a real job after all.  She will only be there through the end of this first week of school.  I finally had to just say that I trusted them.  I hope to mean that very soon.