Confessions of a Martyr

I have just made a connection based on something which has stuck with me since the end of July and something that came up today.  Both conversations (the only meaningful way I make connections) were with outside vendors to our school district.  But not the roll-your-eye kind of vendors, but actual educators who now serve schools from the outside with their products/services.  Educators you have philosophical conversations with and it doesn’t come with a bill.  I respect them and think of them as having a broader sample size/classroom than I do. 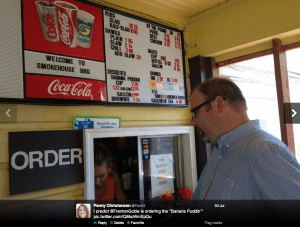 I couldn’t have told you exactly why it stuck with me at the time, but when @trentongoble made the statement that all teachers were martyrs it stayed with me.  It was a point in the larger exchange we had over if public schools could deal out social justice.  Oh boy, I *am* a martyr.

But I felt like he was being a little condescending, I thought he was telling me I was being a martyr in a bad way – like how I am going to own it, but make it a good thing?

Then today @Amos_ALP walked me right up to the mirror on the same thought process.  He was conducting a series of very (impressive) impromptu model lessons and during a break shared how the reactions of teachers to change are often from an emotional place, not entirely informed by logic.  Duh you say?  Well, yeah, of course.  Then the next model lesson occurred in a course which I used to teach.  He effectively modeled the use of literature circles in reading a science text/workbook.  I liked it – thought I would have tried it, but an amazing thing happened next… when we went back to debrief I pointed out that the time consumed by that process was an inordinate amount of time to spend on that topic.  Now, mind you, I was fine with the other lessons (read: the content I hadn’t taught), but this was too long to spend on four types of tectonic plate boundaries.

Pull up a chair and let’s feast on the potluck of issues I have just laid out on the kitchen table.

So, now seriously, who am I being a martyr for here?  Because there are plenty of good people to be a martyr for – those who don’t know better, those experiencing issues outside their sphere of influence, kids.  But I was reverting to my teacher badge as if I was just pulled over by the police and hoping to get leniency on something which was going to involve a cost and be uncomfortable.  You know, like we ask kids to do how many times a day?

I’m going to have to remember to only play that martyr card when I mean it in the future.  I’ve got a stellar driving record to uphold.