This was my 3,000th tweet. I did not even realize that I had surpassed 3,000 until the next day when I had an occasion to look something up on twitter.com directly.
Surely, this is a chance for reflection. I am not a Tweet Goddess, but do find Twitter an indispensable educational tool. So, what is different than a few years ago for me?

You can find your Twitter Birthday at twbirthday.com, they even give you a copy of your Twitter birth certificate free of charge, how very web 2.0 of them. 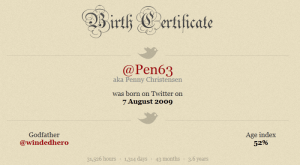 Now I am slightly suspicious of teachers who are not at least reading Twitter. And I definitely consider Twitter a worthwhile pursuit on school time! (Schools should as well, because we all know if teachers get hooked on something good they will call on it 24/7, off the clock.) I see it as a way to connect the mavericks that have been traditionally spread out to the corners of the Earth and given them encouragement and an outlet. I see Twitter as a way to control your own weather. If you are surrounded by those with a contrary attitude, find different colleagues via Twitter.

I would now say this could be extended to students to who use Twitter to learn. I still reserve the right to ban Kardashian nation building, but have since learned that potential bleed over between learning and living exists. Better to open Twitter and educate students, but big thought, that is true about most tools.

I no longer see Twitter as just for educational technology either. I think when I started on Twitter that was my focus, but now I delight in finding divergent passions in one place. I believe Twitter has evolved as much as I have started to look around at different resources. The largest hashtag I follow is #edchat and that has opened me up to a wide variety of educators who challenge my ideas about all types of education.

Looking at my 3,000th tweet I realize I do not actively filter out my personality, I actively ask for feedback, and I am mixing work and home life. I think this is a healthy sign that this tool is useful for me beyond my work life.

When I reflect on what I thought about Twitter for educators I think about how I explained it to other teachers and how I observed how non-educators (mis?)used this awesome tool.
My assumptions about what one should/should not do were pretty revealing, and have softened. I view followers differently than non-educators I realize, and maybe most teachers do too.

I explained it as a positive Teacher’s Lounge where you could get great advise, tips, and make some great connections.

I used to advise people to verify a user account by looking over the account and if the other user seemed legitimate follow them. I implied that if that user was following or followed by other teachers they were somehow worth following. I still struggle with what makes a follower worthy of being followed back. I think this goes to the heart of the differences between the world of education and the world at large. For the most part, teachers want to share and help each other. The world at large is more competitive and often critical of each other.

I distinctly remember implying that following 1.5-2 times the amount of followers you had showed you were constantly seeking out new resources

I remember hearing about a denial of service attack involving Twitter right before I signed up and know I had in the back of my mind that the reliability of the service might be sketchy.

I know that at the time I signed up Twitter was blocked for both our teachers and students. Since then our district has allowed teachers to login via our network, but there are still blocks on guest wireless/phones. And students were allowed and then re-blocked (but that’s another blog entry). I guess what I think is ironic in look at my assumption about reliability I’d that I thought the platform itself was unstable and really the network I operate within is the real wild card!
Twitter democratizes educational thought and leadership like nothing before it. Bill and Melinda Gates should save their money on reforming education, if this doesn’t do it, nothing can!