Moving from a Conceptual to Experimental Practice 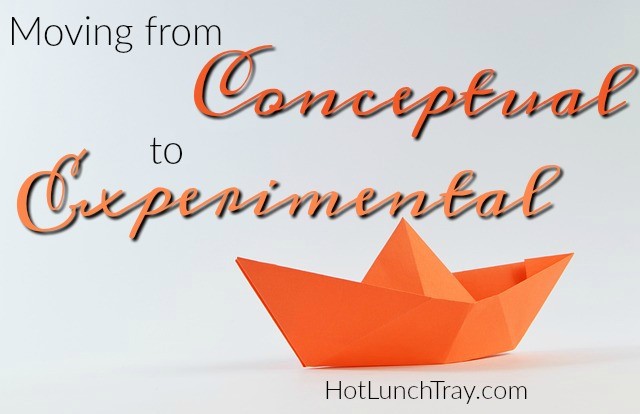 Innovation. It is what some people have for breakfast. Or so we’re told.
It is another facet of the tale of the difference between predestination and creating your destination. Adam Grant in his book Originals: How Non-Conformists Move the World, offers the examples of early achieving and late-blooming innovators and the reasons behind the seemingly opposed ways to innovate he terms these “the two life cycles of creativity.”

Examples of innovators who peak early are often tales of those who conceptually create innovation. A conceptual innovator brings an innovative perspective to a situation. By definition that is someone new to something. A fresh, if not young, view on a situation. Einstein was an example Grant cited as someone who introduced a revolutionary idea to physics, but then was unable to incorporate further conceptually correct ideas into his schema; he was conceptual, but then was unable to incorporate new ideas into his schema later.

Examples of innovators who peak later are mostly those who experimentally innovate. The flexible mind maintains a loose goal or plan … the experimental innovator values and uses the permutations of trial and error. By nature of the number of different trials, this type of innovation takes longer to realize. It is more prolific past the initial fresh-to-the-situation innovation.

I have been a conceptual teacher. I knew by 4th grade I would be a teacher and I studied the art of teaching presented to me as I maneuvered through school. Of course I experienced early success, I already knew the rules, but was able to apply fresh ideas. I excelled conceptually, but may have missed opportunities as I gained experience. While I had areas of specialty which made me a valuable team member on a teaching team or grade level, I was never as highly regarded in the conceptual mindset as I was the first few years I taught. Because I experienced praise and success early, I was not as willing to voluntarily break out of that formula which worked – – – to work harder and stick with my ideas.

And then of course, I had to change.

I experienced a start of school year where I was not teaching. Until September 9th.

Then, because I had to, I tried something different in which I was definitely not an expert.

I had to learn new content, new developmental norms in students, I changed regions so I had to adjust to peer interactions and expectations. There was no control, I experienced a loss of autonomy. I had to select peers to rely on for guidance. I had to learn so much – while I was doing it. But it turned out to not only be one of the best places of my career, but for the first time since the very start of my career I could thrive in the moment.

How could you move from Conceptual to Experimental as a teacher? A coach? #ETCoaches

The next time I made a big change in my career I knew I needed to change-up the predictable, monotony in my classroom, in my professional life. In 2009, when nothing looked certain, I took a job as an instructional technologist funded through the American Recovery Act for only two years. And now, well over two years since I can say that I have seldom done the same thing twice in this job. I still fight the deep, source urge to conceptually go into an interaction with a solution. I am best at this job when I enter an exchange of ideas, questions, and wonders with a loose plan for where I think the conversation might lead, but do not mandate where the conversation must end.

To truly move from conceptual to experimental I still have some work to do on my internal monologue, but I am more tolerable of the uncertain – and I am better at my job for it!