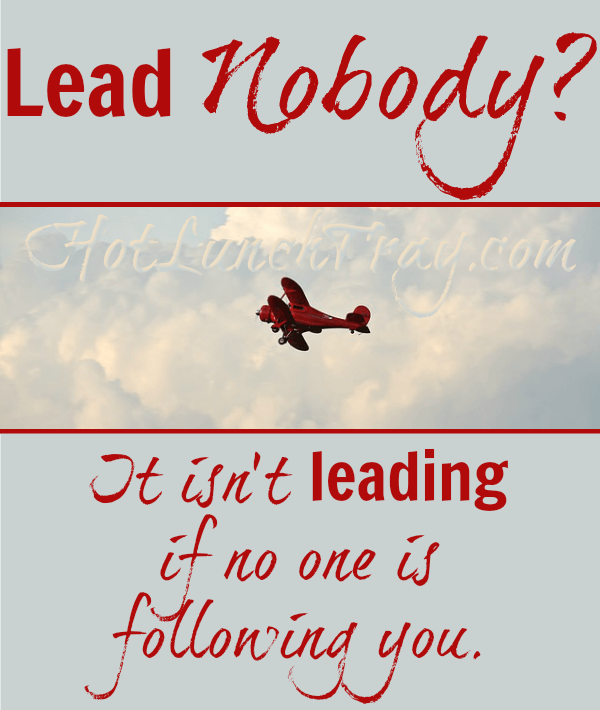 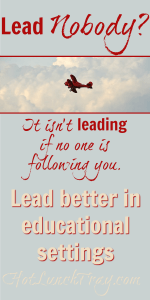 Have you ever noticed that something is missing from some leaders? Like followers?
How did that happen and how can you avoid falling into that same trap?

Leaders who do not Lead

Some people are in a predetermined leadership role, literally the job description describes them as leading something. The leader should be leading people or shaping the environment, but they aren’t.

Is the leadership role too big? Does the entirety of the description fall outside their comfort zone? Human nature is to concentrate on what we can do already, if the role is too big one might expect leaders to concentrate on the areas where they can perform at high levels and leave some areas unattended. The two areas which need attention from these leaders are people and environment.

The people in their trust are neglected.

The environment they are in charge of is not tended and goes wild.

Lead, but no one Follows

Some leaders are lacking official subordinates. From the outside it looks like there are no followers, but take a second look are there followers laterally? This presents itself often between teachers. Many teacher may follow the lead of another teacher.
The good news is that any educator can lead this way, not just lead those “under,” but lead laterally within a peer group. This follower-less look is not so bad – and is within reach of most educators.

People need to be the focus of any leader. To lead laterally an extreme amount of care is taken to show that there is trust between people to share successes and challenges, but to solve it within this group. The most reliable and consistent of these group members are leaders.

The environment takes care of itself between a loyal supporting group of teachers. From the outside it can seem closed, but it is likely protected and should be something any other group of teachers aspires to!

Courage and inspiration comes from that surrounding environment – and anyone can be a leader if s/he concentrates on the environment in which we envelope others. Make it a caring one!

Educators know that random reinforcement is a highly effective tool at training people to continually retry the same thing watching for a different result. Randomization is effective, but rarely for leadership. Leaders which fluctuate between managing, supporting, and ignoring are sending signals of inconsistency and advertising that they cannot be relied upon.

This is often punctuated by bouts of micromanaging. Micromanagers lead by insisting something be done a certain way and monitoring the steps with excruciating detail. However, what they could be doing is managing the people doing the work or making the environment better for those doing the job.

People are only important when they can be controlled.

Environment is not something sustained, invested in over time, but in ineffective spurts.

Two areas which require attention from leaders are people and environment. #edchat

Are leaders made or born? Author and TED speaker Simon Sinek dispels myths about leadership and reveals the one thing that good leaders always get right on this episode of Inside Quest with Tom Bilyeu.
You may have seen a snippet of this (40:00+) on Facebook about millennials in the workplace – it is bigger, more important, and so much more than just that. Enjoy!